To attract and retain Users, Apps need to be highly relevant, now + evolve and morph to continue being useful – to respect people learn and have different needs over time

…or risk falling victim to the Mobile Engagement Crisis – because the App is not engaging or has very limited appeal – and the User ” clicks away quickly ” or ” never comes back “.

1. Average Retention & Churn for All Apps 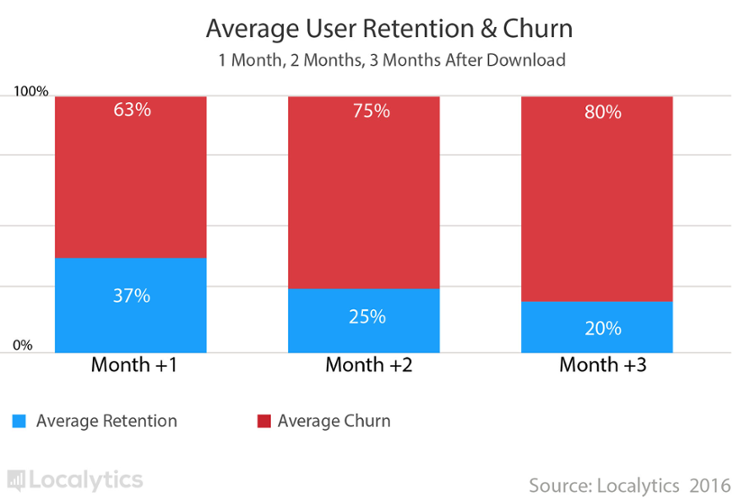 2. Average Retention and Churn by Industry 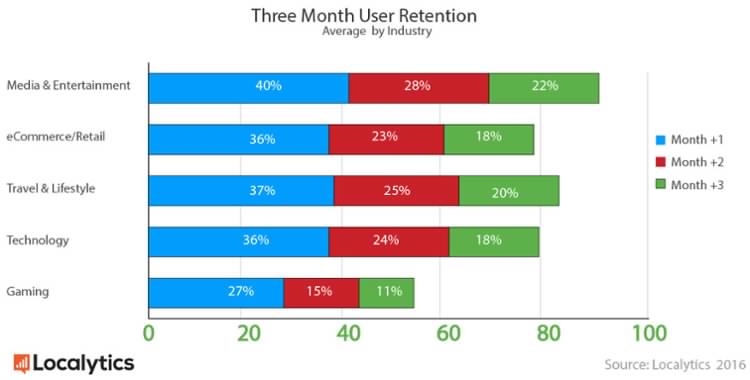 Looking at the data by industry, Media & Entertainment Apps have the highest retention across the first three months after a user downloads – keeping 40% of users coming back for more in the first month alone.  This comes as no surprise, as the introduction of both web and mobile Apps had led to changing desires in the way your audience consumes music, information, video/television and news.  Gaming Apps on the other had continue to struggle to keep users around, showing the lowest average retention in the first three months after the app is downloaded.

3. Average Retention and Churn For High Performing Apps by Industry

There is a distinct difference between high performing apps and the overall average when it comes to retention.  These are well-known and trusted apps who have grown their user base to large numbers.  Travel and Lifestyle apps especially have been able to establish themselves in their industry and keep a large number of their users around in the three subsequent months after download.  A recent TripAdvisor study found that 42% of travelers worldwide use smartphones to plan or book their trips, so if travel apps wish to remain successful in retaining users, it’s up to them to continue developing personalized campaigns designed for different user segments.