In January 2017, a customer agent called Jim set a world record for paying a claim on behalf of the insurance start-up Lemonade. It took Jim just three seconds to cross reference the claim with the customer’s policy, run anti-fraud algorithms and send wiring instructions to the bank. From the User perspective, this superhuman effort was very impressive – but not to the organization – because Jim is a Bot. Jim is one of an army of AI-powered conversational programs that’s changing the way people interact with an increasing number of organizations. Various companies who have launched Bots include Bank of America, MasterCard, Wells Fargo, Capital One and many more.

Chatbots have emerged to improve the User Experience and the effectiveness of service delivery as well as realize greater operational efficiencies as Client self-service capabilities expand – since Bots better enable people to get answers to their questions or to make it easier to learn about services available to them. Bots are now another option for Clients to engage with your organization that extends on the historical methods of – visiting a physical location; calling an agent; browsing a website/app. With the need to provide more options to people and satisfy increasing demanding expectations (ie: quick gratification, personalization, location awareness, etc.), Conversational Bots are compelling since they can raise the bar on delivering a great User Experience (with natural conversation) that interfaces to the digital world – instantly and conveniently. With ‘Live Chat’ Agents at the desktop having been around for several years (via Amazon, eBay, etc.), mobile has expanded and accelerated opportunities – in the mobile ‘always on’ world where natural language is becoming more pervasive.

Facebook arguably kicked off the mobile AI era when it gave brands the ability to create Bots for Facebook Messenger in 2015. Now there are tens of thousands of Bots on the platform. Other platforms followed. Bots are now supported across multiple channels such as Twitter and Slack. However, though these channels are popular, they are not universal. That’s why SMS has also become a critical platform for Bots. Because of this, Bot Messaging is now a growing component of the enterprise SMS space (worth $17 billion in 2016 and a projected $58.75 billion by 2020 – according to mobileSquared). Extending on this, with the emergence of a next-gen form of SMS called RCS – which offers many rich features – this should accelerate the process. 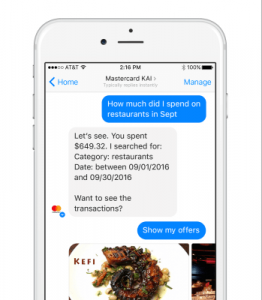 • 25% of organizations are already using Bots to engage with customers.
• 92% of organizations using Bots do so to automate customer-facing functions.
• 88% use them to reduce churn.
• 84% use them to reduce back-end costs.
• 72% believe Bots are cheaper and more effective than apps.
• There could be 3.18 billion unique global mobile monthly active users of chat apps by 2020.

Because of the significant benefits, financial services firms are leading adopters of Bots – mainly because Bank Customers tend to ask the same broad group of questions such as –

These questions are typically easier for a Bot to answer than more open-ended queries – which are usually routed to a human agent for a response to the Customer.

While Bots give customers speedy answers on platforms that are convenient for them, they also bring important new operational improvements and efficiencies to the organization since they work 24 X 7 every day of the year, don’t take holidays, or require a salary or insurance, etc. Further, as well as performing tasks consistently, the more sophisticated the Bot, the more personalized the experience for the Customer. As a result, Bots can not only save money but also increase revenue and brand value. Since the benefits are significant, “ In the next 15 years, it’s likely that 45% to 75% of jobs in the financial services sector will be performed by Bots / Robotic Advisors” says Cliff Justice, KPMG advisory principal. “That should translate into enormous cost savings of up to 75% for firms that get on board.” Extending on this, Juniper Research projects the savings for healthcare and banking could be $0.70 per interaction. That’s more than $8 billion per year by 2022.

But will customers resist? There’s no doubt that the stakes are higher for banks than others when it comes to AI. In a 2016 report, Forrester advised caution since “ Money is an area where people are least willing to put up with mediocre Bots ” . For example, if Taco Bell’s TacoBot misunderstands a person’s request and orders three tacos instead of one, the results are unlikely to be catastrophic. If, however, a Bot interaction accidentally leads to the same person sending money three times or paying a bill wrong, the results can be costly.”

In the way of insight, there is growing evidence that people are warming to Bots. In 2016, DBS Bank in Asia-Pacific created a Bot for Digibank, its mobile-only service where it recently reported the Bot now handles 82% of customer queries ! Because of this, it appears more banks will need to become more pro-active in building Customer Experiences around Bots.

So, if consumers are ready to embrace Bots then the question is: how much deeper can the relationship go? Can Bots do more than just answer the same selection of common questions ? An example of this is when the Bank of America unveiled its Erica Bot in 2016 where it was “designed to be not just a virtual assistant – but each customer’s personal advocate.” At the launch, B of A showed how Erica could provide account balances plus detect spending patterns and then suggest different products that might help the customer avoid going into overdraft or make more return on their funds. In this sense, Erica is not just a Customer Agent, but also a Sales Representative.

Meanwhile, Mastercard’s Facebook Messenger Bot (available to issuer banks) lets users drill down into types of spending. In conjunction with this, Kiki Del Valle, Senior VP of Commerce for Every Device at Mastercard, says: “A customer can ask the Bot how much she spent in restaurants in the last three months. She can then set a cap on spending and set an alert for when she nears the limit. It’s very easy to do this in a natural language chat session.”

Of course, the long-term success of Bots depends on the naturalness of the communication. No one wants to be harangued by a know-all AI. And people will be unforgiving when a Bot makes stupid verbal errors. This may be why text-based Bots, as opposed to voice Bots, are appealing. Text sessions are asynchronous. Users can also store conversations and return to them when convenient – like after a major shopping spree! Either way, because of the significant advantages, expect Bots to be more pervasive going forward.